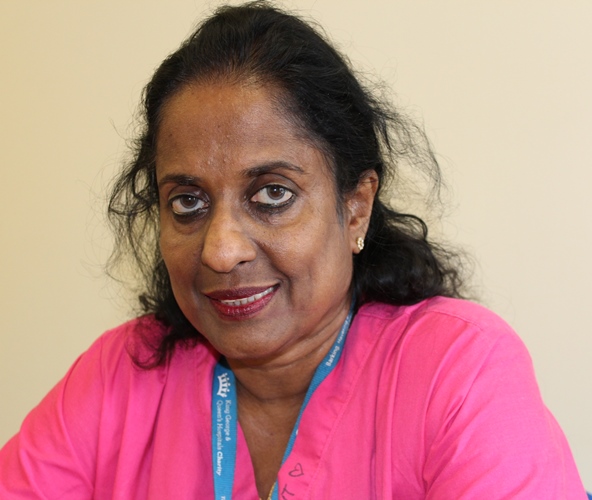 All our teams are currently working extremely hard as we, along with the rest of the NHS, tackle Covid-19. That’s why we wanted to give our colleagues the spotlight, as part of our In Conversation With interviews, to share what they’re doing and the impact on them.

Here, we speak to Kantha Niranjan, our clinical lead for geriatrics at King George Hospital.

Lives: In Chigwell with husband Raj, a GP in Barking. Their son, Gajan, 35, is also a GP while daughter, Niru, 36, is a social worker in Haringey. Niru also has three children; Dilan, nine, Reyan, seven, and Mila, five.

And: After losing relatives in the 2004 tsunami in her home country, Sri Lanka, Kantha has been passionate about supporting the disadvantaged communities there through her charity work.

I grew up in Sri Lanka and am from a non-medical family, both my parents were teachers, then my dad became a successful businessman. His aspiration was for me to become a doctor, and as I enjoyed science and also liked the humanity and compassion involved in being a doctor, I grew up wanting to be one.

I did my training at the Peradeniya Medicine Faculty and once qualified, I went to work in the Batticaloa Hospital in my village. It was lovely because everyone knew me and I was very well respected. It made my parents very proud, and I felt like I was giving back to my community, I treated some teachers I’d had growing up and that was very rewarding. And I met my husband when we were both working there.

I also spent a few years working as the doctor in charge of a chest clinic and was involved in a programme to control TB, it was very prevalent in that area of Sri Lanka at the time. I travelled to run clinics and also carried out case finding in remote areas of the Batticaloa district. It was very interesting work. Of course things are different now and there are many more test, then there was only sputum (saliva and mucus) examination and chest x-rays to diagnose TB.

My husband moved to the UK in 1985, and I came the following year. The medical curriculum is the same in the UK as Sri Lanka, so many doctors aim to come here to complete their MRCP, diploma and speciality certificate examinations. I came because I wanted to become a consultant.

It was emotionally very hard however as I left my children behind to be cared for by their grandparents, and as civil war had broken out in Sri Lanka at the time, it meant I couldn’t visit them. The children joined us in the UK a couple of years later; it was a very happy reunion.

Originally, we only planned to come to the UK to do our higher education, and then come home to serve our country, however, due to the unrest, and the fact that we belong to a minority Tamil group, we couldn’t go back. Sadly, the civil war lasted until 2013 so we couldn’t go back for 30 years.

How did you end up at our Trust?

My aim was to work in general medicine and neurology, however, after I completed my professional linguistic assessment board exam to allow me to practice in the UK, the only available job was as a senior house officer (SHO) in geriatrics at Luton and Dunstable.

I was also an SHO in medicine at Chase Farm Hospital, Enfield, then was a registrar in care of the elderly at North Middlesex Hospital.

I never thought I’d end up specialising in geriatrics, however, I developed an interest in neurology and lots of these issues are found in elderly patients.

I first came to our Trust in 1994 as a research registrar in neurology and did research into Parkinson’s disease, which typically affects older patients. When I came here I was struggling to find senior registrar jobs and worked closely with Professor Lesley Findley who really helped me. I then worked on rotation as a senior registrar in the West Midlands, during this time did an MSc in the gerontology, the science of aging. Then a consultant geriatrician role came up at our Trust in 1998.

It was on Foxglove ward at King George Hospital which was a really nice place to work. I was so pleased to get my first consultant job not far from London, as we wanted to be more settled for the children.

In my time here I’ve seen Redbridge and Havering healthcare combine to become our Trust, led on stroke rehab for geriatrics, worked on the acute elderly care unit at Queen’s Hospital, and been the named doctor for safeguarding adults. I came back to King George Hospital to be our geriatric lead in 2018.

A part of my role which I really enjoy is supporting our junior doctors. I’m a trained appraiser so I can help them prepare for their appraisals, and I also carry them out. Having been a young doctor in a foreign country once, I really understand the needs of our foreign doctors too.

How has the Covid-19 pandemic affected your role?

My role changed completely and it was a challenging time. I became a Covid physician. What was really good was the amazing teamwork and how it improved relationships across all specialities. Relationships have been forged that weren’t there before and they will continue, we’ve set up WhatsApp groups and we continue to give each other advice on our patients.

It was also interesting to have an opportunity to contribute to a pandemic as I may not get another chance. And being part of the Covid team, the camaraderie and enthusiasm with my colleagues made me feel I was ten years younger!

I have very good friends in our Trust and find it a very supportive place to work.

I love looking after elderly patients, and still enjoy being very hands on. I like helping them to get their independence back.

In elderly care, some patients don’t recover, so it’s about making them comfortable and relieving their suffering. I support them and their families and am passionate about good end of life care.

I’m proud that in 2017 Sunrise B was our first ward to get Gold Standard Accreditation, recognising great end of life care – I go to go to the House of Commons with the Palliative Care team which was wonderful. In 2019 I worked really hard with the team on Fern ward to get the accreditation there.

What else are you passionate about?

I’m very involved in my charity work. Following the tsunami in Sri Lanka in 2004, I didn’t know if my parents were alive for 24 hours. They survived, however, I did lose some relatives.

The eastern district of Sri Lanka where I’m from was heavily affected and two weeks after the tsunami I went with out with a team to hold medical clinics to help people. I remain involved in supporting people in that area, which is important to me, especially as I’m in a comfortable position myself, so I am able to help.

I regularly return to the Batticaloa district to run cataract camps with friends, eye surgeons from the UK, for removing cataracts and preventing blindness for patients who do not benefit from the same healthcare as we have in the UK, and hold dengue fever prevention camps. I’m also the chair of the Friends of Batticaloa Hospital (A UK registered charity).

In 2005 I joined the Medical Institute of Tamils which was founded by Tamil doctors in the UK. I became the first female president in 2010, a role I did for two years. I’m now a trustee for the charity and continue to support its work to help the underprivileged people in Sri Lanka.

And in 2008 I became a fellow of the Royal College of Physicians. I’m very proud that at the time my father was alive to see pictures of me receiving this award.

What do you like getting up to outside work and your charity commitments?

I like walking outdoors, I also really enjoy spending time with my grandchildren – reading with them and taking them out. And I love cooking traditional Sri Lankan curries.