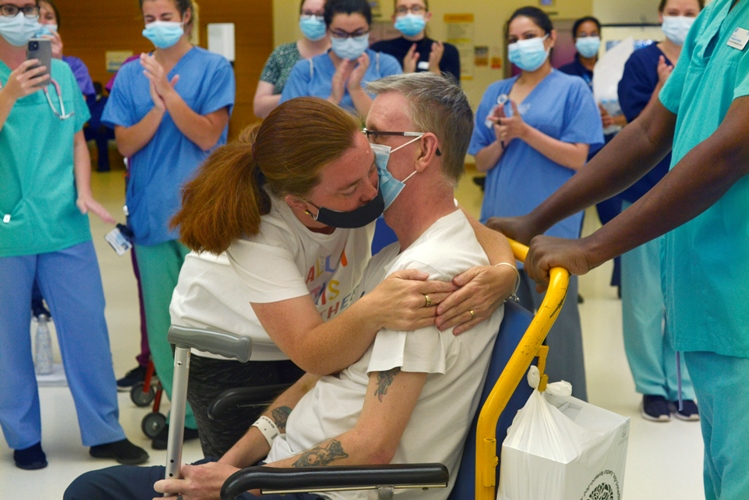 Steve’s wife Gemma (pictured above with Steve), 41, said: “I can’t praise the hospital and all the staff enough, everyone was absolutely amazing. When he was in an induced coma I didn’t speak to him for eight weeks, and Heather McCarthy from the Intensive Care team was brilliant, she was calling me all the time with updates and even called to check on him now he’s home.

“Steve was in hospital for our eldest son, Ryan’s 23rd birthday, Ryan wanted to cancel it, however, Heather set up a Zoom call so he could see his dad, and all the staff sang him happy birthday.”

Warehouse manager Steve, of Boxmoore Road, Collier Row, first complained of a backache in early April. Over the next few days his breathing got worse and he also developed a temperature. He was admitted to Queen’s Hospital on Wednesday 8 April, then moved to Intensive Care over the Easter weekend, on Friday 10 April.

Gemma said: “It was not Good Friday for us. Steve texted me in the morning to say he was feeling better, the next thing I knew he was in an induced coma in intensive care.

“About a week later I was called in to say goodbye to him as he had multiple organ failure and they didn’t think he was going to make it. It was the most horrible experience of my life. The staff were brilliant, everyone from the security guard on the door, and the entire Intensive Care team. A lovely doctor was really good at explaining everything to me. His oxygen levels went up and he improved slightly while I was there, the doctor said it was because I was there talking to him. That meant so much.”

Steve, who also has 21-year-old Joe with Gemma, said: “It’s really nice to be home with the family. I hadn’t seen the boys the whole time and I was reunited with them a few days before I was discharged when the physiotherapy team took me outside for the first time.”

Gemma added: “He’s got a long recovery ahead of him and needs our help – he said he’s a pain but he’s not. It’s so nice to have him home and have some normality as a family again. He’s still got his sense of humour too.

“We didn’t know what to do when he first got home, we just sat looking at each other. Our dog, Jinny, also can’t stop staring at him, trying to work out where he’s been!” (Jinny is pictured below with Steve.) 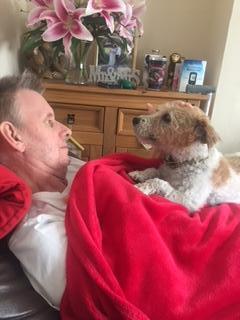 Gemma and Steven only married 18 months ago, just before Gemma turned 40 (pictured below are the couple on their wedding day with their two sons). They’ve been together for 24 years. 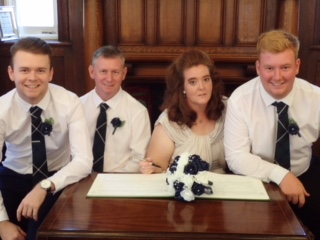 Steve is just one of the more than 1,500 patients with confirmed or suspected Covid-19 who, during the pandemic, have recovered and been sent home from our hospitals. This includes 66 people in the last week.