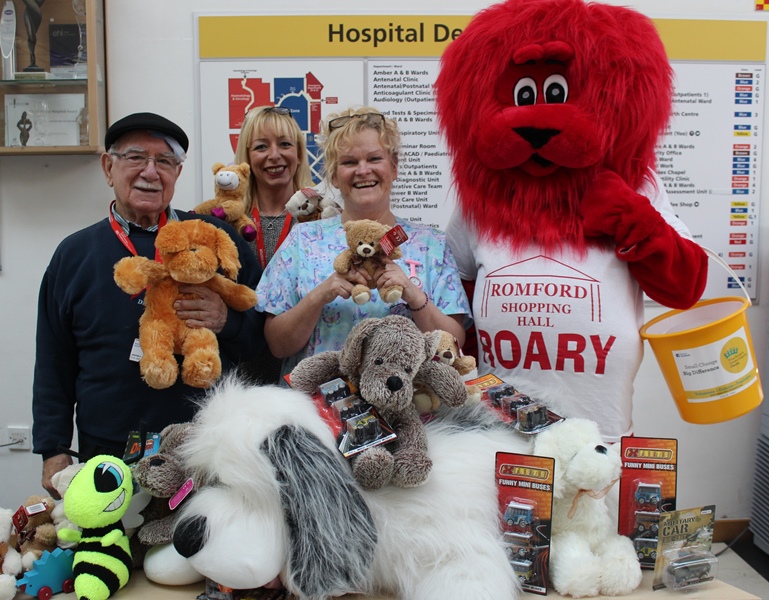 A big bundle of toys was delivered to the children’s ward at Queen’s Hospital – thanks to the fundraising efforts of an avid stamp collector and a big ‘Dulux’ dog.

Harry Matthews, 87, has collected stamps since he was seven and worked for the Post Office for almost 40 years. Since retiring, he has set up a stall in Romford Shopping Hall to show his stamps, educating children and adults alike about where they came from, and also valuing and revealing the history of other people’s stamps.

In the run-up to Christmas, he added a giant fluffy dog to his stall, complete with a policeman’s hat, and asked people to make a donation in aid of the King George and Queen’s Hospital Charity, to fund toys for the children’s ward.

Harry, of Main Road, Romford, managed to raise £160 which he spent on a variety of toys including teddy bears, cars and games.

On Tuesday (17 January) he delivered the toys to Lyn Clark, our play specialist on Tropical Bay ward.

Harry said: “I’m known as Harry the stamp man. We nicknamed the dog ‘the Dulux dog’ and had him on the table with a bucket and I asked people if they’d like to make a donation for the children’s ward at Queen’s Hospital.

“All the donations were from shoppers and the people who visited my stall. Thank you to everyone who made a donation.”

Harry also donated the huge toy dog, now named after him, to our charity.

Pictured is Harry with some of the toys he donated, alongside Michelle Fitzgibbons, from Romford Shopping Hall, mascot Roary and play specialist Lyn Clark,