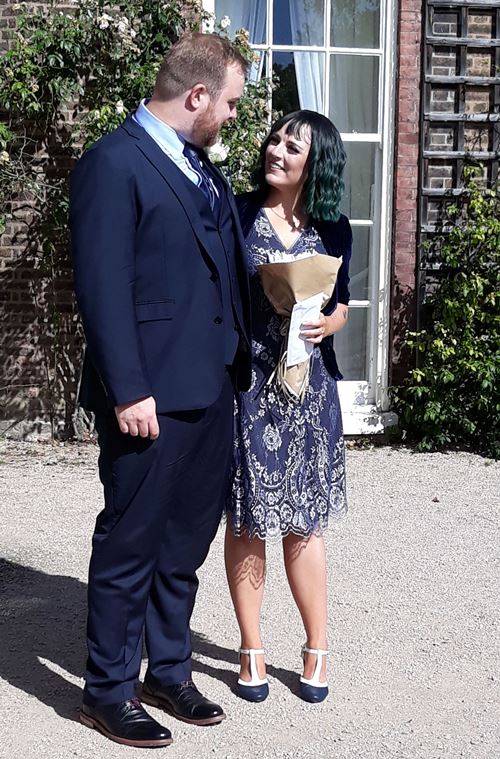 Gemma Norburn, a trainee anatomical pathology technologist at our Trust, has shared what her pandemic wedding was like after getting the go-ahead with just weeks to go.

She said: “It felt odd and really good at the same time. I think the nicest thing we all reflected on was that it was really positive that something nice happened during a difficult time.

“I can be quite neurotic sometimes and during the early planning stages, was obsessing over stupid things. In the end, it took the pressure off and I couldn’t stop smiling all day.”

Gemma and partner Chris, who got engaged in 2017, were due to marry at Langtons, Hornchurch, followed by a festival-style reception, on Thursday 20 August. When the pandemic hit, they expected they would have to postpone. However, they got a call from the registry office just five weeks before to say they could go ahead.

They had the ceremony, with some additional touches including socially distanced seating and masks for the guests, and have postponed their reception until next year.

To make the day special, Gemma, who regularly runs death cafes, events where topics around death are openly discussed to dispel taboos, wanted to arrive in style. What she actually arrived in exceeded even her expectations.

She added: “Chris suggested a limo and as I know funeral directors from my role in our mortuary, I thought that might be my best chance to get one at short notice.

“When we were discussing it, they made a throwaway comment that it should be fine as it wasn’t like I was asking for a hearse! That made me think, is that an option? It’s probably the most plush car you’ll ever be in, and we’re only ever in them when we’re dead, I also thought it was quirky like me. We did attract lots of looks on the way to the ceremony, in an empty hearse. I think it’s good to help normalise the use of a vehicle like that.”

Before the big day Gemma had to consider whether her dad could walk her down the aisle, however, as they had formed a bubble, he could. Which also meant both her parents could also arrive with her in the hearse.

Gemma added: “Nothing went to plan, even the day before we were resolving issues. However, because of the pandemic, it didn’t have to be perfect. It was lovely just being able to get married.

“We’ve been together since 2011 so being married only feels different in subtle ways, like when I was talking about Chris the other day and said the phrase, ‘my husband’, for the first time!”

After the ceremony, the newlyweds enjoyed drinks with close family and friends at the Hop Inn, before a buffet in the garden at their home.

The couple, who have two, three-legged rescue cats, are now looking forward to celebrating with the rest of their family and friends when they can. Their festival reception, complete with food trucks and a hippy-vibe, is due to be held on a campsite in Great Tey.