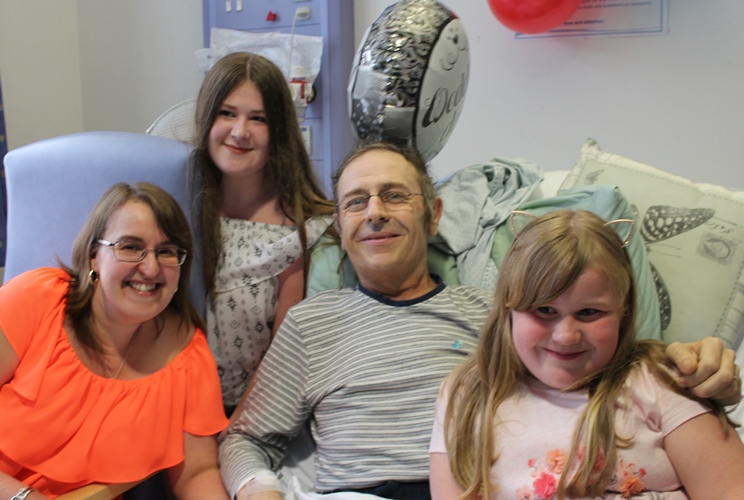 It was an emotional day on Ocean B ward at Queen’s Hospital today (30 June), when a couple who have been together for over two decades married just days after receiving a terminal cancer diagnosis.

Robert Davies, 52, was diagnosed with head and neck cancer last Christmas. Sadly, he found out on Wednesday (28 June) that it was terminal.

He and partner Julie, 44, decided to tie to knot after being engaged for several years, so our staff worked hard to make it happen in just 24 hours.

They married in Robert’s hospital room this morning, watched over by family and friends including their two daughters Megan, 14, and Cerys, eight.

Julie, a team leader for Superdrug, said: “The staff have been fantastic since he was admitted on Monday. They decorated the room for us, with help from our family.

“It was really lovely that our family could make it, and that our daughters could be with us.”

The couple, who live in Barkingside, met at local pub the Unicorn 21 years ago. Julie still fondly remembers that Robert, a car mechanic, was singing karaoke and even remembers the song – ‘Poetry in Motion’.

As well as family and friends, many staff from the ward attended the wedding, and Julie adopted Robert’s last name straight after the ceremony.

Pictured are Julie and Robert with daughters Megan (left) and Cerys.