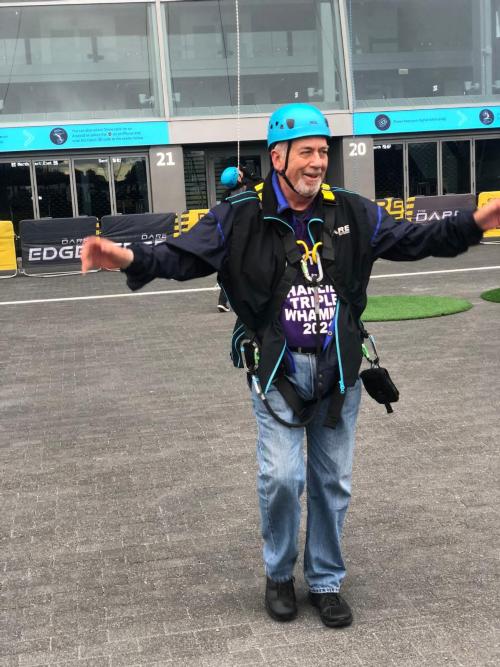 Our volunteer Charlie Richardson (above) is back to his daredevil tricks – scaling the O2 before completing the skywalk at Tottenham Hotspur’s ground, finishing off by abseiling the 42metres down to the pitch.

Grandfather-of-eight Charlie completed his latest challenge all in one day on Saturday (23 October). So far he’s raised £1,245 for the King George and Queen’s Hospitals Charity, with donations still rolling in! Everything he’s raised will go towards supporting our Volunteer team.

This isn’t the first time Charlie, of Romford, has done something unusual to raise money for our hospitals, he’s already taken on a skydive and abseiled down one of London’s tallest buildings, Broadgate Tower.

He said: “It was brilliant, it was so nice to get back to doing something like this, I think it gives everyone a lift.

“The only time I got a bit nervous was when I was about to step off the building at Tottenham to do the abseil – some of them were learning forward but I kept my back to the drop! I’m fine with heights once I’m on the way but I don’t like to look down – I look straight.”

The pandemic meant he had to pause his fundraising over the last two years, so he was more keen than ever to get this one underway.

He added: “I’m lucky to have had so much support, from my family, my wife Marian came to everything on Saturday, my colleagues and friends, who think I’m mad, and my neighbours. Even people I met while doing the challenges wanted to sponsor me when they I heard I was doing it for my local hospitals.”

Charlie first start fundraising for our Trust to give something back after his wife Marian was treated for breast cancer.

You can still support Charlie, if you’d like to donation just visit his JustGiving page.