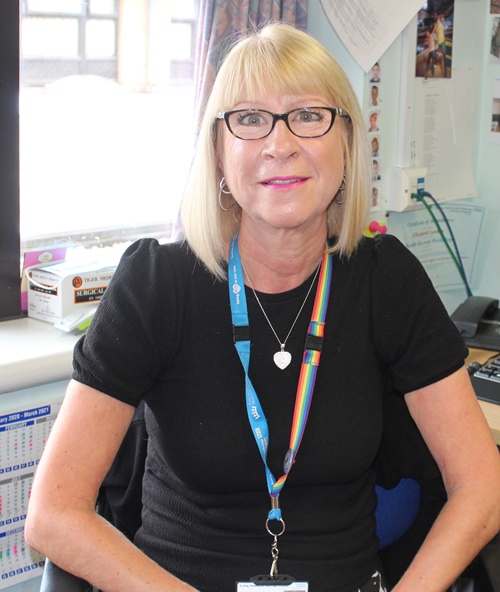 Dealing with additional deaths during the Covid-19 pandemic has been something everyone in the NHS has had to deal with on varying levels. For our Bereavement team, it meant often dealing with double the number of deaths on a daily basis, and completely changing how they dealt with bereaved families.

We spoke to long-serving bereavement officer Julie Atkins (pictured), who has been in the role at our Trust for over 12 years:

“Previously, we would ask for cause of death when preparing a death certificate, this became simply asking, ‘is it Covid?’, instead. It felt to me that in 90 per cent of cases, it was.”

Julie works on the admin side of registering a death, getting the notes of the decreased person, liaising with doctors and issuing a death certificate. Pre-Covid, families would come into our hospitals in person to pick up the certificate, and this was one of the many things which changed.

Julie added: “Now we scan them directly over to the registry office. We still have contact with the families over the phone. Things were so busy at Queen’s Hospital during the peak that these calls were redirected to my colleagues Deborah Carter, who was shielding at home, and Elizabeth Lawton, based at King George Hospital.

“I know it was very emotional for them as they were speaking to families who often hadn’t been able to say goodbye to their loved one.”

The most challenging aspect for Julie was training additional staff pulled into the team to help, while also dealing with the increased volume of work. Colleagues from our Patient Experience and Complaints teams were among those working with her.

The team was also supported by a number of doctors who were unable to work on the frontline due to their own health. Instead they supported by signing death certificates. This would usually be done by the doctor who last saw the patient; however, this requirement was removed nationally during the pandemic.

Julie and her colleagues also put in place a seven-day service, including covering bank holidays, during the height of the pandemic, which only ended in July. The busiest day she experienced was Easter Monday.

So how did Julie manage when she was without her usual coping mechanisms of enjoying an active social life, and couldn’t see one of her three sons (or meet her new grand-kittens, which her eldest son and his girlfriend adopted during the pandemic)?

She added: “I was on auto-pilot. We have a good relationship with our undertakers, who still came in to pick up cremation papers; I got on well with them, and with the doctors. You have to in our job. The thing I most enjoyed about working through the pandemic was meeting so many people I wouldn’t otherwise have.

“We were also well supported and my manager would pop in regularly to make sure I was okay.”

For now, Julie is missing seeing families because, as a people person, it’s her favourite part of the role.

She said: “I love dealing with them and showing empathy and compassion. I am now speaking to families again so that’s my opportunity to provide that same service over the phone.”