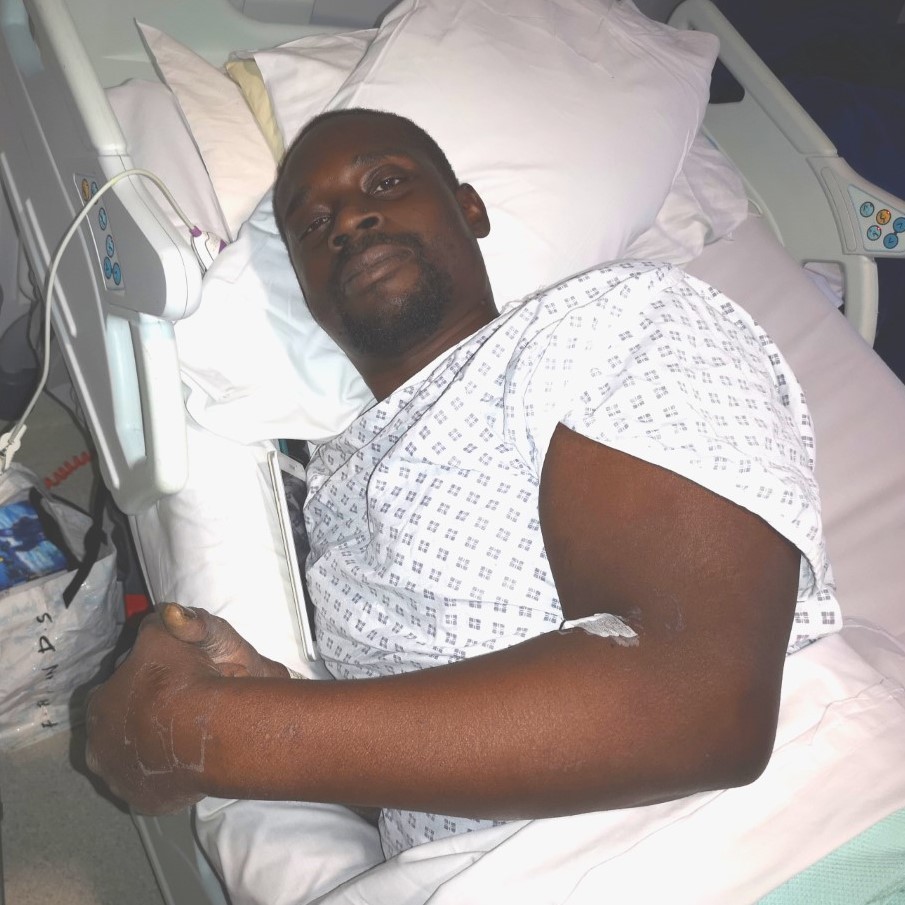 One of our cancer patients, who has been given the all clear following a 19-hour operation, has spoken of his gratitude to the staff at our Trust who treated and looked after him.

Speaking of the first time he noticed symptoms, Dean said: “I had two tumours on my back passage but initially they weren’t too big. I kept thinking hopefully in due time it will just disappear but I realised it was only getting worse.

“I went to my GP and they referred me to the hospital. They did some scans and within a week or two I got a phone call saying it was cancer. When I first heard the news, I was really, really upset because I’d had so much time to deal with it.

“If I’d gone to my GP when I first noticed the symptoms, it wouldn’t have got as bad as it did.”

Dean was initially cautious about undergoing a major operation and the decision was made to try other treatments first.

“I’d undergone chemotherapy and radiotherapy and the cancer had gone. I was happy about that and I went back to my normal life.

“I got a phone call about six months down the line asking me to come in. They did another MRI scan and discovered that the cancer had come back. I was devastated.

“Mr Rajendran always said to me that I’m way too young for this to be happening to me,” Dean said. “When he explained the operation to me, I felt sick to my stomach because it was a lot to take in. But I knew I had no other option so I said ‘yes, let’s do this.’

“I knew it wasn’t going to be easy and (the chance of getting the all clear) wasn’t 100 per cent.

“I had to come into the hospital a few weeks before my operation because my symptoms and my pain were so unbearable. I couldn’t sit down on my bottom, I couldn’t walk around, I couldn’t do anything. I was just in unbearable pain.

The procedure started at around 8am on Friday 5 February and it finished at 3am the following day, with many of the staff involved staying the length of the procedure. Dean received the results a couple of weeks later and was elated to discover that he’d been given the all clear.

“I was delighted, I was so happy when I heard the news. Even having that operation was no guarantee that (the cancer) was going to go.

“Mr Rajendran and his team, the nurses on the ward, they’ve been very good to me. I would like to say thank you to everyone who has looked after me.”

Niroo said one of the reasons the operation was a success was down to the excellent teamwork by different teams across our Trust.

He said: “Other than the operation itself, there was no outside pressure or stress.

“Some of the theatre team was shuffled around and swapped on the morning of the operation. They would have come to work expecting a normal day and they stayed until the end for the patient so that was fantastic and really kind of them.

“The juniors were really keen - not just interested from a training point of view but also to see the whole operation through.

“The anaesthetist, Dr Ayad Khalil, stayed the whole day. I rang him before and made sure he was aware and okay with doing a long procedure. You need an anaesthetist who can transfuse you appropriately and keep a level head and Dr Khalil was excellent.

“The radiologist was phenomenal as well. We used a radiologist from St Mark’s Hospital (in west London) so there were quite a few phone calls to them beforehand to plan the operation.

“There was also a lot of work outside the operating theatre to make it possible. Julie Wright, Interim Divisional Director of Nursing for Surgery, was really helpful in making sure there was going to be an ITU bed for the patient and she also advised the transfusion nurse, drawing on her own experiences.

“I would like to say thanks to Sister Aminat in theatres, who came in very early to make sure there were no delays starting a long case, and to Sister Imelda.

“The ward staff who have been looking after the patient since have been very good as well, they deserve a lot of credit for their efforts since the operation.

“There was a great camaraderie and spirit in the theatre. It was phenomenal. It made me feel really happy to work here!”

This operation was one of the longest ever carried out at our Trust but, with advances in the treatment on offer to patients, Niroo believes it is a sign of things to come.

He said: “I am used to long, advanced procedures from time working in the Peter MacCallum Cancer Centre, a surgical oncology unit in Melbourne which gave me experience of robotic colorectal surgery, intraoperative radiotherapy, pelvic exenterations and hyperthermic intraoperative chemotherapy (HIPEC).

“These are all services I hope my incredible colleagues and I can start offering to patients in east London and Essex. There are a lot of patients who would benefit from having these options. It could give them a better quality of life and also a longer life.”

Thangadorai Amalesh, Consultant Upper Gastrointestinal and Laparoscopic Surgeon, said: “I would like to thank everyone involved in the operation for going above and beyond their duty in delivering care for the patient.

“This was one of the biggest and longest cancer operations we have ever carried out in our Trust. It was great to see different teams coming together to help our patient care.”

Dean was discharged on Friday 5 March, four weeks after his operation, and was looking forward to going home and seeing his loved ones.

“When I lie down on my back and bottom, it gives me a lot of pain but the doctors are saying in a few weeks, all of that should calm down so I’m happy to go home to my family.”

“I feel like I’ve got a chance at life so I’m going to grab it with both arms and do what I need to do to try and stay a role model towards the kids.

“Also, because I’ve had the cancer for two years or so, I just want to have some fun. I want to go on holidays and things like that.”

If you have a sign or symptom of any form of cancer, you should not be afraid to seek medical help by contacting your GP in the first instance.

Niroo said: “There’s a lot of fear at the moment about the risk of exposure to Covid-19 but it is more important if you’ve got a possible cancer that you do get it checked out.

“Hopefully it will be nothing but if you have something, the earlier it’s picked up the better the chance that treatment could be able to cure it.”