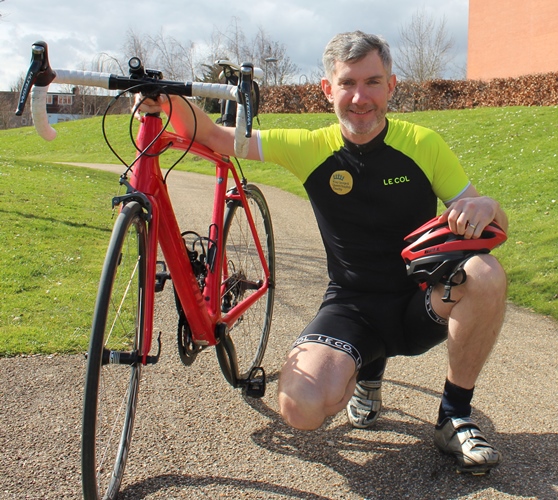 Keen cyclist Stuart Wilks (pictured), 42, is encouraging everyone to get on their bike and help raise money for our charity, the King George and Queen’s Hospitals Charity.

He’s organising the first of what he hopes will become an annual event, Pedal4Patients, a fundraising bike ride between Brentwood and Queen’s Hospital in Romford, on Sunday 29 April. There are two different routes – 45 or 65 miles – allowing more serious cyclists or newcomers to these events, to choose the challenge to suit them.

Stuart, of Junction Road, Brentwood, has already raised around £7,000 for the charity in thanks for the support he and wife Sarah, 42, received when their daughter Charlotte was stillborn at Queen’s Hospital in August 2016.

He said: “We were looked after phenomenally well and everyone was so supportive.

“When something like that happens, the NHS really goes into overdrive and it makes you realise how important it is. After we were looked after so well on the bereavement suite, we thought all the staff were so amazing and they could do with some extra support, so we decided to raise some money.”

They quickly raised £3,500 thanks to the support of family and friends and Stuart later raised an additional £3,500 he took part in the Fred Whitton Challenge, a 120 bike ride through the Lake District, last May.

The family raised the money to refurbish the Snowdrop Suite at Queen’s Hospital, which is for parents who have lost babies at our hospital. Stuart and Sarah were keen to raise as much as they could to help other parents facing a similar situation to their own.

Now Stuart, who runs his own marketing and business development consultancy, is hoping to encourage lots more people to raise money for the hospital department of their choice by taking part in Pedal4Patients.

He added: “We already have lots of different people signed up so I’m really looking forward to it. We’d really love more people to join us, and it’s not too late to sign up now.

“The longer route will be more intense while the shorter one is fairly flat. We’ll have marshals throughout to look after you, it’ll be well signposted and we have feed stations so you can refuel, and even better, they’re at pubs along the way!

“Cycling is a great way to get fit that’s not too high impact and these of events are really good to meet people and make it more social. It’s for a brilliant cause, so sign up and join us.”

You can find out more and sign up online www.pedal4patients.org.uk.