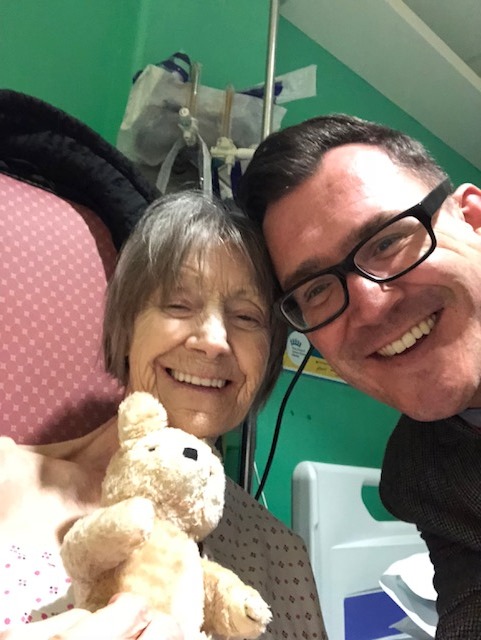 Christmas may have come and gone a long time ago, but it was much happier for a Rainham pensioner after our dedicated staff reunited her with her lost teddy.

The bear, known simply as Teddy, is over 30 years old and was bought for Vi by her husband, who died 25 years ago.

Vi, 78, adores Teddy and was bereft when he was lost during her stay at Queen’s Hospital.

She had been in and out of hospital since May 2017 due to ill health, and Teddy was lost when she was transferred between Queen’s and King George Hospitals in November.

Her son Gary, 42, knew how much Teddy meant to her, so, with the help of dedicated hospital staff, he turned detective to ensure Teddy was brought home where he belonged.

Gary said: “My dad had bought Teddy for their 25th wedding anniversary and he’s very special to mum. Whenever she goes away, she always takes him with her.

“When he went missing she was devastated, she even wrote a card for him saying she was sorry to lose him but she hoped she’d see him again one day. It felt like a member of the family was missing. I started off talking to staff on the ward and everyone got involved in looking for him. Then I was put in touch with the laundry team and Carol Allen kept me regularly updated on the search and, when they found a teddy, emailed me a picture so I could check it was mum’s.”

After confirming the found bear really was Teddy, Gary, who lives in Chemlsford, went to pick him up. But poor Teddy had been in the wars, he’d lost his jumper, an eye, his stuffing had come out and even his head was hanging by a thread.

With some TLC, and help from a few friends – including a friend’s mum who knitted an identical new jumper for Teddy – he was ready to be reunited with Vi ahead of the festive season. Gary and the rest of the family are keen to share Vi and Teddy’s story as a thank you to the dedicated staff who ensured he got back to where he belonged.

Gary said: “I took him round with some shopping, unpacked everything for her and then said; ‘look what else I’ve got’, her little face was a picture.

“I can’t praise Carol and her team enough for finding Teddy, and keeping me informed on the search. He is so special to mum that I knew I couldn’t just give up.”

It was quite a feat that Teddy was found, given that having been swept up with the laundry, he was taken away to be cleaned with linen from 19 other hospitals.

Pictured are Gary, Vi and Teddy