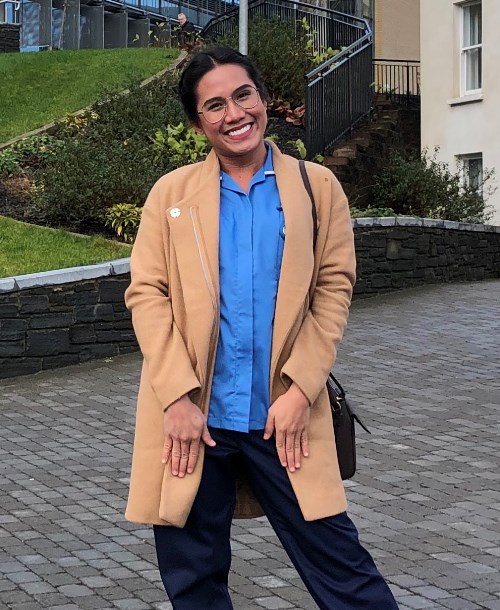 Nurse Angel Toledo (pictured above and below) has shared her story this Pride Month about the support and acceptance she receives from our Trust and her colleagues as a trans person.

Angel, 28, applied to work at our Trust when she was a nurse working in the Philippines where she was forced to wear a male uniform and cut her hair short.

She said: “Back home, living as a trans person is not so easy and I felt I had to sacrifice who I was to do a job I loved. That’s why I was so happy to come and work at our Trust – I’ve felt comfortable and accepted right from the beginning.

“Even during the interview process I was accepted and able to wear a dress and make-up – I was so overwhelmed I cried! It was surreal coming here and getting a female uniform and being able to have long hair. It was amazing! Back before I began transitioning, I didn’t look in the mirror much. Now when I do, I see the person I really am – it’s something money can’t buy, it’s being you.”

Pride Month is very important to Angel, of Romford, as a chance to celebrate her achievements, no matter her gender.

She added: “I worked hard in my nurse training and was proud when I graduated with honours. I earned it so gender should never be an issue.

“Pride Month is really important to me as it’s a reminder to love who you are, and do what you love. Everyone performs best when they are comfortable in who they are. Not everyone who I work with knows I am trans, so I share it with them as I am proud of it. To work in such a diverse, accepting Trust is a dream come true for me.”

Even though Angel has found the UK a more accepting place to live and work, this was not her reason for wanting to relocate. Angel wanted to be able to send money home to pay for chemotherapy for her mother, who was battling cancer.

Raised by her mother as a single parent, Angel and her mum were extremely close and sadly, she died before Angel joined our Trust in January this year. Despite it being highly emotional for her, Angel continued with the move to honour her.

Just weeks into her role with us, Angel became a TV star when she took part in the BBC series, Saving our Nurses. The five-part programme, which aired earlier this month on BBC One, focused on our trailblazing Senior Intern team, and the support they give to new nurses, including those arriving from the Philippines.

Angel said: “Being part of it was such a huge privilege for me. I never thought I would be able to share my story like that. I hope to inspire others, and make everyone remember why equality is so important.

“I’m so proud to work at our Trust, so it was really exciting to be part of the series, to be filmed, and then to see myself on TV.”

You can catch Angel’s episode of Saving our Nurses on the BBC iPlayer.