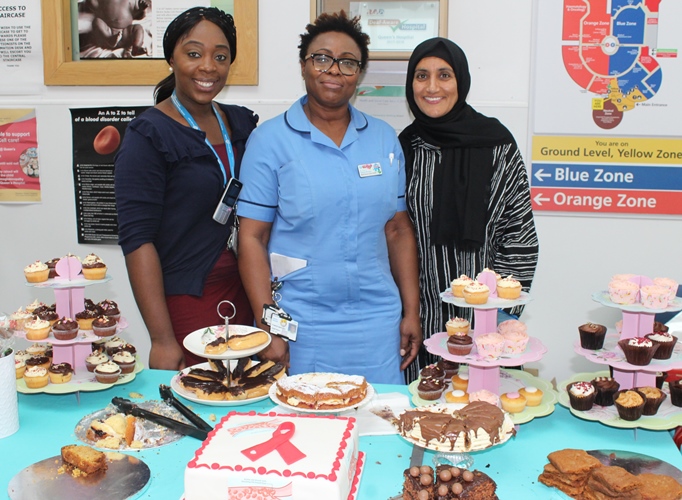 A bake sale held at Queen’s Hospital on Friday 26 July raised over £400 – all of which will be spent on treating children with sickle cell disease and thalassaemia to some fun activities.

It was run by our Haemoglobinopathy team, with support from parents whose children are being treated for these long-term conditions.

Mehmuna Mallu, whose 13-year-old daughter Aliyah has sickle cell and has been treated by the Trust since birth, baked cakes to sell on the stall, and helped out on the day. The most important thing for her was raising awareness.

Mehmuna, of Rivington Avenue, Woodford Green, said: “Not enough people know about the condition so anything we can do to raise awareness is a good thing.

“I know the team well as Aliyah has been having treatment since she was born, and I’ve learnt a lot from them over the years. They’ve really supported us. I also volunteer with the team which looks after adult sickle cell patients. Aliyah helps raises awareness too; she even gave an assembly at her school, Beal High School.”

Several parents helped to bake and buy cakes for the fundraising sale, in aid of the King George and Queen’s Hospitals Charity, and many helped on the stall too, selling cakes and talking to people about the conditions their children are living with.

Debbie Omodele, our children’s haemoglobinopathy nurse specialist, said: “We were really proud to raise so much money. It was lovely that so many parents helped out by baking and buying cakes, and raising awareness by speaking to people on the stall.

“Many of the children with these conditions are frequent visitors and long-term patients of ours, so we thought it would be nice to raise some money to treat them to some fun activities.”

Pictured is Debbie on the stall with nurse Geena Brown and Mehmuna.