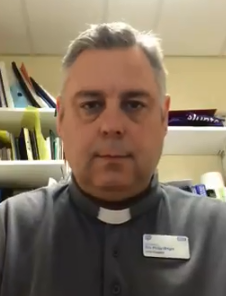 Our Lead Chaplain, Rev Phil Wright, has shared his experience of supporting our staff, patients, and their families through the pandemic. Read his personal, honest and heartfelt account below.

“Wow, what a rollercoaster we’ve been on.  I thought it would be good, helpful and somewhat cathartic to share my reflections of this period.

Often when taking a sermon or even a training session, I use the phrase ‘finding moments of beauty in the tragedy and trauma’, and no truer phrase comes to my mind when I look back on this time. I think I’ve experienced every type of emotion possible in recent months. I’ve been challenged in every part of my life, at times feeling like I was in control and playing the superhero, and other times I’ve felt like a complete failure and wanted to curl up in a ball and hide. I’ve cried with those around me, and also laughed and had feelings of joy and pride. As I say, a real rollercoaster of feelings, emotions and moments of beauty.

I was on annual leave when lockdown started so when I arrived at work the following week, along with the rest of the world, the hospital had changed so much. I remember feeling anxious, wondering what I was walking into. I also had a real desire to get back to work and be part of the madness that was starting to surround us.

On a Saturday evening on call I’d already been contacted to give end of life care to two Covid-19 patients, when I was called to go to King George Hospital to support another Covid patient and her daughter.

As I drove along the A127 I remember feeling afraid. PPE was still new to everyone and I wondered if I’d put it on correctly, and whether it would work. It was the Easter weekend and the pandemic was at its peak; our staff were already exhausted and everyone was feeling the pressure.

I arrived at the ward which was very surreal as it looked like a scene from a science fiction film. I was advised what PPE to don and did so with a little bit of trepidation. As I put on the gown, I remember thinking, ‘how close can I sit to the patient and her daughter?’ It wasn’t the first time I’d donned PPE, but this felt different, more intense.

I arrived at the bedside and sat with the daughter who was crying and holding her mum’s hand - her mum had just died. I felt sick that I hadn’t got there in time. Questions rushed through my mind - did I take too long putting on PPE? Could I have driven faster? We sat together and talked, and I prayed over her mum. Through her tears she told me that her father had also died, just four days before, of Covid-19. This disease had ripped her family apart like a wave crashing against a boat and ripping it in two.

I sat with her in silence for some time, helping her to regain some strength. When I got back to my car I wept, exhausted but proud to have been part of this family’s journey. I felt like I had played my part and contributed to the cause.

Each morning our Mortuary would send us a list of patients who had died and which mortuary hub they had been taken to. We would then call the next of kin to inform them so they could give the information to their undertaker. We were then asked to ring the family again a few days later to see how they were progressing in arranging the funeral – this was because the hubs were under pressure and bodies needed to be moved to the funeral directors.

I found this hard at first; what do you say to someone who has just lost a loved one they were likely unable to visit, and I was calling to tell them they’d been moved to a temporary mortuary hub maybe nowhere near them? But after finding the right words this became an important part of my work. Families would often be very grateful for the call as it gave them a chance to talk about their loved one. It was time consuming, given that I was calling so many families each day, however, it was also a privilege. I felt it was worthwhile and something we could do well during the chaos that was surrounding us.

I found it harder as demand became greater, however, especially when contacting families again regarding funeral arrangements. I felt I was intruding when calling the same family for the second or third time to encourage them to get their funeral director to collect their loved one. While we were under pressure nationally, I felt compassion and empathy for the families who were struggling with their loss. Most of the families we spoke to were not coping.

It also had a personal effect on me. When I was sitting at a patient’s bedside, I felt I was playing my part and had a purpose. Making calls began to feel like chasing numbers and I felt helpless. I spoke to another senior manager around this time and found they felt the same. However, I then started to see the calls as a way of supporting bereaved families. The more we talked, the more we were learning about what support they needed – more than general funeral advice, they needed to tell you about their devastation that they couldn’t say goodbye, and that they were frightened.

In just April and May we spoke to over 380 families and this process became so important we’re going to continue it. I’m not sure of the logistics yet, but it’s something our Chaplaincy and Bereavement department will work on together.

Like so many staff, the pandemic has affected me outside work too. At the beginning of lockdown everyone was thinking on their feet and I felt I was thriving in leading my team; coming up with ideas and encouraging them to think differently and they responded brilliantly. But as time went on, I started to struggle. I felt the management side of work became overwhelming and I didn’t consider how Covid-19 was affecting me personally, having a knock-on effect on my life outside work.

I was going through some significant personal issues and, as a social person who was always out and about, cabin fever started to set in. I became irritable and snappy with staff, it’s fair to say I wasn’t me! Like so many I was struggling with the feeling that there was no end in sight.

Usually when we deal with trauma or tragedy, even a terrorist event, it’s short-lived in the heat of the moment. Of course, the impact is felt much longer afterwards but the actual eye of the storm, the incident and tragedy tend to be for a short period of time. We do our bit and then go home, and our life continues mostly as it did before. Now that was gone, there was no normal to go home to, nowhere to escape or recharge our batteries. We’ve lived the trauma at work, and we continued to live it at home.

During this period it was often the smaller things that brought me the most joy. Leading the silence, for the NHS staff who had died, was an honour. The feeling I had in the atrium when I looked up and saw so many people blew me away. I’ve led many silences over the years, but this was different, you could not only see the emotion in people’s eyes, you could feel it. It was definitely one of my highlights.

I hope this reflection has given you a snapshot of what this period was like for me, and I’m sure for many others. Looking back, I’m extremely proud to have been, and continue to be, part of an amazing team at our amazing hospital Trust.

There are some things that our Chaplaincy and Bereavement department will continue to do differently when lockdown eventually lifts completely. I want us to keep developing the way we work with bereaved families. For example, I want us to communicate more effectively via social media, including Twitter. One of the biggest areas that I haven’t really mentioned here is staff support and how we have driven and developed it.  This will also continue.

There have been many ‘moments of beauty within the trauma’ – in fact, far too many to mention. When we’re in the middle of a crisis we don’t usually have the opportunity to reflect and we rarely recognise or take on board our feelings whether positive or negative, but when we do, we grow and develop as people.

I would like to thank everyone who has supported Chaplaincy and Bereavement over this period, the feeling of being part of a team and the bigger picture was incredible.

It’s an honour and a privilege to be our Lead Chaplain."​