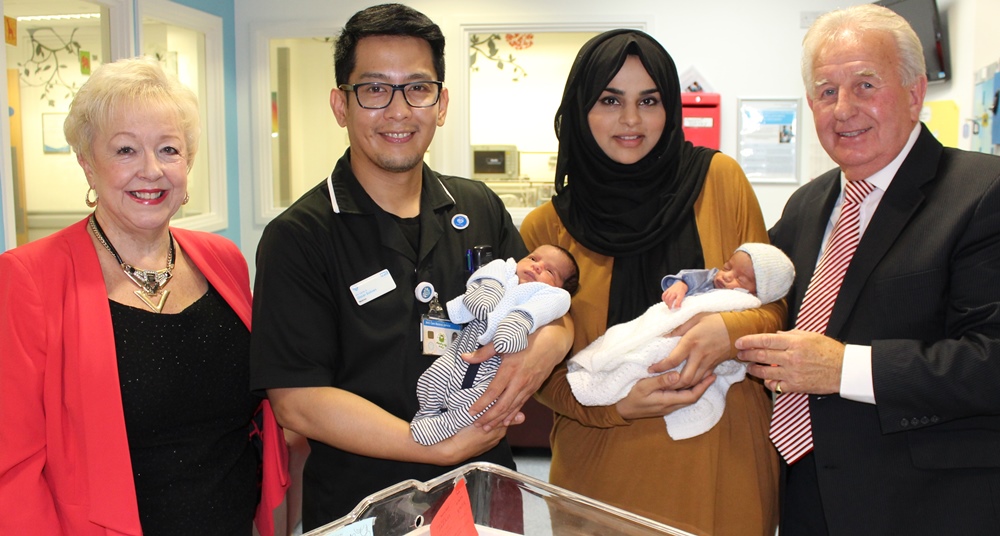 Councillor Brian Eagling, the former Mayor of Havering, paid Queen’s Hospital a visit this week to deliver a cheque for over £5,000 for our Neonatal Intensive Care Unit (NICU).

During his year as mayor, Brian chose the charity First Step for his main appeal, but close links with our NICU meant he wanted to also give something to the hospital, to help the families of premature babies.

He said: “When I was first mayor in 2000 we raised a lot of money for the NICU which was then based at Harold Wood Hospital. My wife, Bunny, worked as a medical secretary on the unit so we had a real connection with it.

“It’s lovely to be back and be able to donate to help local families and their babies.”

On his visit to our unit, Brian was greeted by two-week-old identical twins, Umar and Usman. It was a special day for the brothers as Umar was going home for the first time to join his brother, having stayed on the NICU to gain weight.

Mum Shama Akram, of Woodlands Road, Ilford, said: “We’re really excited to have them both at home so we’ll be celebrating tonight for sure.”

The 33-year-old has three other children at home, aged 9, 7 and 4, waiting to be reunited with their little brothers.

The twins were just three and four pounds when they were born at 35 weeks, and are a great example of those who have benefited from the specialist unit.

The £5,400 donated by Brian and wife Bunny will go towards providing the best possible care for premature newborns and their families.