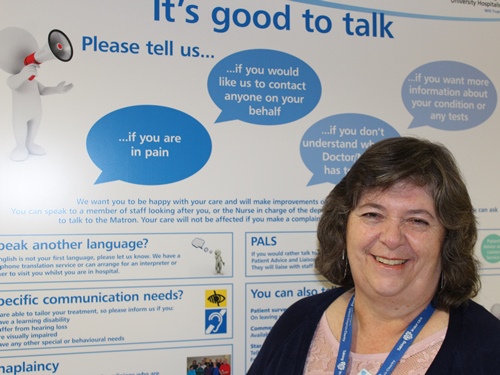 Local health campaigner Elaine Clark, who was chair of the Improving Patient Experience Group (IPEG) for seven years, has stood down.

Elaine, who joined the group following husband John’s death in 2008, stepped down to focus on her role as Patient Experience Lead for our Outpatients’ department.

Her insight as someone who lost their spouse at Queen’s Hospital was invaluable for IPEG and led to her becoming chair in less than a year.

Now the mother-of-three and grandmother-of-five, of Roosevelt Way, Dagenham, is focusing on her role ensuring patients have the best possible experience at both our hospitals.

Using her IPEG background, and having done dual roles for the last two years, Elaine, 58, has already worked on lots of improvements she’s proud of.

She said: “We’ve introduced pagers so people can go for a coffee or break if we’re running behind, we’ve refurbished the waiting area at King George Hospital and we’ve also got toys and TVs in the departments so people have some entertainment.

“I’m also there to speak to people if things ever do get fraught. I find that honesty is the most important thing. Nobody wants to be in hospital and it can be a very stressful situation, so anything I can do to make someone’s experience that bit better is worth it.”

Elaine, whose husband died of complications from diabetes, was previously secretary of the Barking and Dagenham Diabetes Support Group, and said it was her voluntary work which got her through when he died.

She added: “I wouldn’t have coped without it. I loved my time at IPEG but it was too much to do both.

“My role is to get the patient’s voice heard, it’s the most important one in the hospital, and we must listen. It’s a big responsibility but I couldn’t think of a better job, it’s changed my life.”