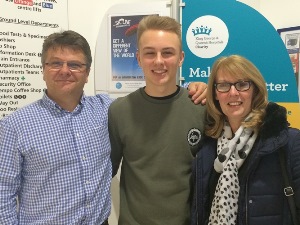 The Pashley family have paid a return visit to Queen’s Hospital to thank our staff for saving the life of 16-year-old Matt after he collapsed on the football pitch.

Matt was playing for Witham Town when he collapsed and was rushed to Basildon Hospital. He was then transferred to Queen’s for emergency surgery, which saw part of his skull removed when bleeding was discovered on his brain.

The family were so grateful for the care and support he received at our hospital they decided to raise some money among family and friends, and even dad Kevin’s workmates at Ford, to donate to our charity, King George and Queen’s Hospital Charity.

Kevin said: “His recovery has been a miracle, when he first came round from his operation he couldn’t see or feel his legs.

“The staff were amazing, he had his operation at 3am, immediately when he got to Queen’s, and that’s what saved him. He had 24/7 care and they never left his side that night. I think that was essential to his recovery, so we really wanted to come back and say thanks.”

Kevin and wife Della were also grateful to be able to spend the first few nights of Matt’s stay in our overnight facilities especially for families of our most critically ill patients, so they were able to constantly remain close to Matt’s bedside.

There was no explanation for football mad Matt’s head injury as there was no obvious collision on the pitch, and Matt remembers nothing. Being young and fit meant he was walking again and able to leave hospital just five days after his operation.

Kevin, who was at the match when it happened, added: “He said the worst thing was losing his hair. He’s pretty much back to normal now; he hasn’t played in a match since but he is back in training and is studying at college, he’s thinking of doing an apprenticeship. We’re still guarded about what he can do, but you can’t stop a 16-year-old.”

They donated £125 to our charity, which will be spent on continuing improvements for other families and patients to benefit from.