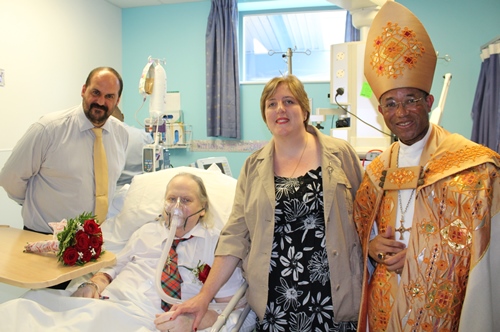 A couple who have been together for 20 years said their vows in Queen’s Hospital’s intensive care unit yesterday (Wednesday), bringing forward their wedding due to serious illness.

Donald Naughton, 66, and Lucy Rayner, of Dagenham, were due to marry in August but a last-minute wedding was arranged after Donald’s condition worsened. He has been at the hospital for almost three weeks with complications related to his diabetes.

Lucy, 42, said: “He asked me to marry him 20 years ago and I said no but I asked him to marry me when he became ill. I’m really pleased to be married but it doesn’t feel any different yet.

“The wedding was put together in a week. The bishop and the hospital have been really good. They made it so easy.”

Our chaplaincy team worked tirelessly to secure a special license so the wedding could go ahead and was legal.

They were married by Bishop Trevor Mwamba – the first time he has performed a marriage in a hospital in his 30 year career.

He said: “It is a very special event for them, and I must make sure everything is the same for them as if it were in church.”

Pictured is best man Robert, Donald, Lucy and the bishop.