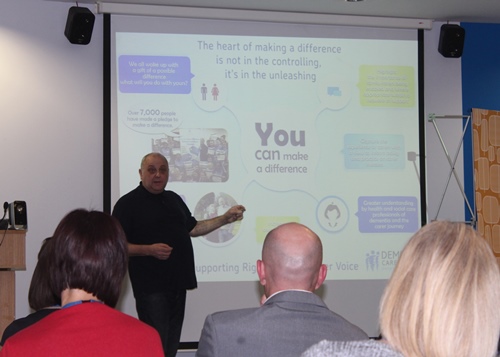 Tommy Whitelaw has shared his moving account of caring for his late mother Joan for five years following her dementia diagnosis with staff at Queen’s Hospital.

He became a campaigner to raise awareness of the condition after Joan died, encouraging others to see the person and not the dementia. It led him to launch Tommy on Tour in 2011, sharing his story with others across the country.

It was his second visit to Barking, Havering and Redbridge University Hospitals NHS Trust. It wasn’t just clinical staff who listened to Tommy’s story – people attended from departments across the hospital.

Tommy was keen to point out that his mother wasn’t simply a patient in bed with dementia – she was Joan, who had led a rich and fulfilling life, and he was keen for anyone who comes into contact with someone with dementia to remember that.

Last year the Trust, which serves one of the oldest populations in the country, launched a new Dementia Strategy. The strategy will build on recent work including the launch of the Butterfly Scheme, which supports people with memory loss, and training for staff to improve care for people with dementia, which has been praised by Prof Alistair Burns, the National Clinical Director for Dementia.